Leadership Is a Choice...and Everyone's Opportunity

Too often we are taught that leaders are either born or made. Or, that leadership is a function of title, position, responsibility, or whether or not you manage a team. When, in fact, neither of these are true. You see, you have an opportunity to lead from right where you currently are at … and it starts with understanding and learning how to lead yourself first.

In this interactive and highly energized workshop, Candy will help you redefine what leadership truly means. She will, not only, disrupt what the definition of leadership is, she will also share tools with you on how you can activate your own capacity and ability to lead by shifting your mindset, implementing new frameworks, engaging in courageous conversations, and holding yourself to a higher level of accountability.

Whether you find yourself interacting with others in virtual environments and not being able to be face-to-face with people, or you have an individual contributor role versus one of managing a team, you can start leading right now, right where you are at. Because leadership really is everyone’s opportunity!

This webinar is sponsored by Delta. 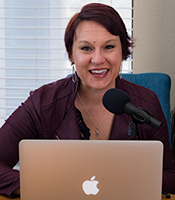 CEO & Founder of You Empowered Strong

Candy Barone, CEO & Founder of You Empowered Strong, is a leadership development expert, trainer, and executive coach, as well as an international speaker and Amazon best-selling author.

She is a catalyst and change agent who works with executives and emerging leaders to help bring “heart” back to leadership while feeding the soul of their business. With nearly 20 years in corporate, combined with a bachelor's degree in mechanical engineering, certification as a Six Sigma Black Belt, and an MBA, she is a master at building exceptional, high-performing teams, maximizing and leveraging ROI, growing emerging leaders, creating metrics for greater accountability, and catapulting individuals to achieve explosive growth.

Candy is a member of the Forbes Coaching Council, was named a 2014-15 VIP Woman of the Year by the National Association of Professional Women, received the 2015 Public Speakers Association Local Collaborator Award, and was nominated as a 2015 Profile in Power Central Texas Woman of Influence.

Candy also has been showcased in CNN, U.S. News & World Report, The Austin Statesman, Austin Business Journal, Be the Boss Magazine, OffBeat Business Magazine, The Chicago Tribune, ciLiving TV, and Femmes Under 40 Magazine, along with numerous radio shows and podcasts. In addition, she serves as a call leader for the Evolutionary Business Council, a Partnering Director for the Public Speakers Association, and a member of the Good Deed Society, and she volunteers within her local community.